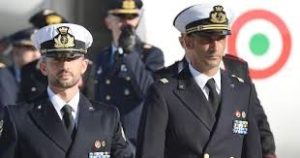 In February 2012, India had accused two Italian marines, Salvatore Girone and Massimiliano Latorre, on board the MV Enrica Lexie an Italian flagged oil tanker of killing two Indian fisherman who were on a fishing vessel of Kerala coast in India’s Exclusive Economic Zone (EEZ). The centre has moved the Supreme Court seeking closure of judicial proceedings here against two Italian marines accused of killing two Indian fishermen off the Kerala coast. The Permanent Court of Arbitration at Hague ruled in the case of killing Indian fishermen in 2012 that India is entitled to get compensation but cannot prosecute the marines due to official immunity enjoyed by them.

India is bound by the award of the Arbitral tribunal formed under the United Nations Convention on the Law of the Sea (UNCLOS). The award given by the UNCLOS is “final and without appeal”, as India is party to the U.N. Convention. The issue of jurisdiction over the case became a big argument between the two countries, It held that the actions of the Italian Marines breached India’s freedom and right of navigation under UNCLOS Article 87(1)(a) and 90, the application said, adding, as argued by India, the Tribunal observed that, in principle, India and Italy had concurrent jurisdiction over the incident and a valid legal basis to institute criminal proceedings against the Marines.

Supreme Court had allowed the two marines to remain in Italy till the tribunal pronounced its verdict:

The Italian marines operating as part of an anti-piracy Vessel Protection Detachment on-board Italian-flagged commercial oil tanker MV Enrica Lexie, are accused of opening fire on a fishing boat ‘St. Antony’ killing two Indian fishermen on board under the misconception that they were pirates. The International tribunal decided that India is entitled to payment of compensation with the loss of life, physical harm, material damage to property and moral harm suffered by the captain and other crew member of “St. Antony”. The tribunal also held that the parties are allowed to consult with each other with view to reaching agreement on the amount of compensation due to India. The Tribunal also decided that it shall retain jurisdiction should either Party or both Parties wish to apply for a ruling from the Arbitral Tribunal in respect of the quantification of compensation due to India, and that, should no such application be received within one year after the date of the present Award, the proceedings shall be closed. India had detained the two marines after the shooting incident but later allowed them to return to Italy on specific conditions following separate orders by the Supreme Court.