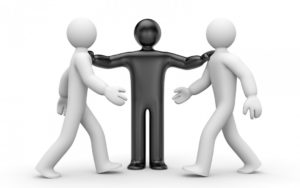 The philosophy of Alternate Dispute Resolution was well-stated by Abraham Lincoln: “Discourage litigation, persuade your neighbors to compromise whenever you can”. In the reality litigation does not always lead to a satisfactory result. It is expensive in terms of time and money[1] and also inconvenient and failing in terms of obtaining justice. The alternative dispute resolution enables change in the mental approach of the parties as the main object behind this system is to avoid multiplicity of litigation to save valuable time, money and also permits parties to amicably come to a settlement. This paper will focus on the Provisions relating ADR to CPC and their mechanism and also the validity of those provisions it concludes by stating the Problems or weakness facing in introducing the ADR in the CPC along with recommendations to those problems

The Code of Civil Procedure is a procedural law related to the administration of civil proceedings in India. The Code has been amended from time to time by various Acts of Central and State Legislatures. With a view to keep the commitment given to the people of India, speedy disposal of cases may take place within the fixed time frame and with a view to implement the report of Justice V.S. Malimath .In the Law Minister’s Conference held in New Delhi, on 30th June and 1st July, 1997, the working paper on the proposed amendments to the Code of Civil Procedure, 1908 was discussed with a view to implement the recommendations of Justice Malimath Committee, 129th Report of the Law Commission of India a it is proposed to introduce a Bill for the amendments of Code of Civil Procedure, 1908 keeping in view, among others, that every effort should be made to expedite the disposal of civil suits and proceedings so that justice may not be delayed. After the discussion CPC (AMENDMENT) ACT,1999 was implemented

S.89 Settlement of disputes outside the Court:

Section 89 along-with rules 1A, 1B and 1C of Order X of First schedule have been implemented by Section 7 and Section 20 of the CPC Amendment Act and cover the ambit of law related to Alternate Dispute resolution[3]

“1A. Direction of the Court to opt for any one mode of alternative dispute resolution. —After recording the admissions and denials, the court shall direct the parties to suit to opt either mode of the settlement outside the court as specified in sub-section (1) of section 89. On the option of the parties, the court shall fix the date of appearance before such forum or authority as may be opted by the parties.”

“1C. Appearance before the Court consequent to the failure of efforts of conciliation.- Where a suit is referred under rule 1A and the forum or authority to whom the matter has been referred is satisfied that it would not be proper in the interest of justice to proceed with the matter further, then it shall refer the matter again to the court and direct the parties to appear before the court on the date fixed by it.”

Denial of justice through delay is the biggest mockery of law, but in India it is not limited to mere mockery; the delay in fact kills the entire justice dispensation system of the country .So in 1996, the Indian Legislature accepted the fact that in order to lessen the burden on the courts, there should be a more efficient justice delivery system in the form of arbitration, mediation and conciliation as an Alternative Dispute Resolution (ADR) options in appropriate civil and commercial matters. Thus, Parliament enacted Arbitration and Conciliation Act, 1996. Part 1 of this act formalizes the process of arbitration and Part III formalizes the process of conciliation. Part II is about enforcement of foreign awards under New York and Geneva conventions

Arbitration, a form of alternative dispute resolution (ADR), is a way to resolve disputes outside the courts. The dispute will be decided by one or more persons. Arbitration is often used for the resolution of commercial disputes. Even prior to incorporation of Section 89 in the Code of Civil Procedure, 1908. The parties to litigation, with mutual consent, could take recourse to arbitration as a mode of resolution of their dispute which was subjudice before a court of law in terms of the Arbitration and Conciliation Act, 1996 itself. The Arbitration and Conciliation Act, 1996 however, did not contemplate a situation as in Section 89 CPC where the Court asks the parties to choose any ADR mechanism. Even though section 89 CPC mandates courts to refer pending suits to any of the several ADR processes mentioned therein, there cannot be a reference to arbitration even under section 89 CPC, unless there is a mutual consent of all parties, for such reference[4]

Mediation is another mode of alternate dispute resolution in which a mediator, a neutral person or third party who is impartial to both the parties, trained in the process of mediation, works with the parties to a dispute, to bring them to a mutually acceptable agreement. In Salem Advocate Bar Association Case, the apex court approved the model mediation rules and asked the High Courts to frame such rules for their respective jurisdiction. Hence, we propose the following clause for mediation referral-  “If the court decides to refer the dispute to mediation then, it may refer to a person or an institution including court-annexed mediation and procedure of such mediation shall be governed by mediation rules of such institution or respective High Court mediation rules.” Law Commission of India in its 238th report on the amendment of section 89 of CPC has recommended a similar clause.[8] Mediation is not recommended, where the is a question of law or offences involving moral turpitude and fraud.

“While Arbitration and Conciliation Act, 1996 is a fairly standard western approach towards ADR, the Lok Adalat system constituted under National Legal Services Authority Act, 1987 is a uniquely Indian approach”. It roughly means “People’s court”. India has had a long history of resolving disputes through the mediation of village elders. The system of Lok Adalat’s is an improvement on that and is based on Gandhian principles. These are usually presided by retired judge, social activists, or members of legal profession. It does not have jurisdiction on matters related to non-compoundable offences. There is no court fee and no rigid procedural requirement which makes the process very fast. Parties can directly interact with the judge, which is not possible in regular courts.

ANOMALIES OF SEC 89 of CPC:

Deliberation on Section 89, CPC was initiated in Salem Advocate Bar Association v. Union of India[9]. The constitutional validity of the section 89 of CPC was upheld and the intent behind its inclusion was lauded. Criticism was muted as S. 89 was a recent insertion at the time. It was opined that the section had not been very effective as its modalities or qualities were yet to be determined. So, a committee was set up to draft model rules, and the apex court recommended the adoption of these rules by the various High Courts so as to give effect to section 89(2)(d), CPC. In the subsequent decision of Salem Advocate Bar Association v. Union of India[10] the apex court purposively reinterpreted S. 89, CPC to reduce anomalies. For instance, the words shall and may in S. 89, CPC and Rules IA-IC, Order X, CPC were read harmoniously and it was determined that may was intended to refer to only the reformulation of terms of a potential settlement by the court. The section mandates formulation of settlement at the pleading’s stages. However, this is not feasible since, firstly, there would not have been adequate application of mind of the judge at the pleadings stage, and, secondly, determining terms of settlement is the domain of the ADR forum. So, a plain reading of the section creates the futile situation wherein courts are expected to do the ADR forums job before referring a matter to it

The subsequent decision in Afcons Infrastructure Ltd v. Cherian Varkey Construction Co (P) Ltd[11], [“Afcons case”]. is the most recent landmark judgement on the issue. The wording of the Section 73(1) of the Arbitration and Conciliation Act is borrowed under this section defeating the objective with which the section was revived as was observed by the Court in the Afcons case.

The terms “shall formulate the terms of settlement” specified under Section 89 (1) of the Code, imposes a heavy and unnecessary burden on the courts. It is a redundant process which further burdens the court and strikes at the foundation of the ADR system. The right manner of interpretation of the Section 89 would be if it is read with Order X Rule 1-A where the Court may only direct the parties to refer to ADR forums and no need to formulate terms of settlement arises.

Section 89 is an important part of the Code of Civil Procedure and is an effective method to resolve dispute between parties where there is scope for the same. The section is right in its spirit as the objective has been to reduce the burden of the court. However, as has been highlighted in the entire paper, the Section suffers from many anomalies, which have reduced its efficiency and act as a hindrance in delivering justice to the people. Apart from the legal aspect of the inefficiency of the provision, another major reason for section failing to fulfil its purpose is the lack of legal knowledge among the people.  Rather than going for Alternate means which are much cheaper and less time consuming, citizens continue to go for trial hoping to secure a larger award from the Court some are concerned that ADR programs will divert citizens from the traditional, community-based dispute resolution systems. To modernize the ADR in the Civil Procedure Code the mentioned loopholes should be removed. Hence, the provision under Section 89 is right in its essence but its purpose is defeated due to legal intricacies, draftsmen’s error and lack of awareness among individuals.

[8] ‘238Th Report on Amendment of Section 89 Of the Code of Civil Procedure,’ (Indiankanoon.org)